The Story of FEG Holsters 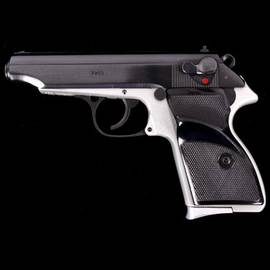 FEG  (Fegyver- és Gépgyár, "Arms and Machine Factory") was founded in 1891 in Csepel (now a part of Budapest). The company has not been always solely dedicated to arms manufacturing as has been involved in the manufacture of gas equipment, water heaters, diesel engines,lamps and various metalware. FEG started producing Walther PP/PPK clones in the late 1940s. They started with their Model 48 which had a minimal difference from the Walther PPS. FEG had later done changes which resulted in the PA-63, a pistol using the 9x18mm Makarov round. The pistol became a standard issue to Hungarian military and police uses. The pistol has a reflective polish which may be a problem within military use, but the cheapness and quick build time of it caused that it was used. The durability and popularity of the pistol resulted in FEG using .32 ACP and .380 ACP calibers to appeal to more gun enthusiasts.