The Story of Tanfoglio Holsters 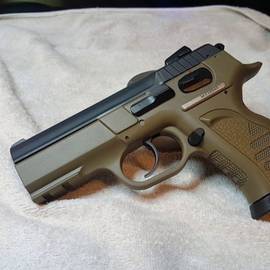 Tanfoglio is an Italian gun manufacturer. The guns they are producing are used in competitions or self defense. The handguns are also imported into the United States by the EAA, European American Armory Corporation.  The company was founded in the 1940s and the first production focused on parts - receivers and hammers. After 8 years they started producing replicas of guns and later on their own designs, however they returned to copies in the 1980s, when they began producing copies of the CZ 75. Nowadays the main prouction is listed for export, 85% of their products are exported to the world. Brands related to Tanfoglio are FIE and EXCAM.