The Story of Rock Island Holsters 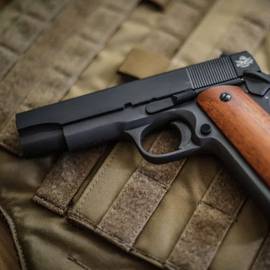 Rock Island pistols are manufactured by Armscor, and more specifically Rock Island Armory, which is often abbreviated to RIA. It  was established in 1905 in the Philippines as a trading company. It’s focus was motorcycles and sporting goods, which included firearms and ammunition. In 1952, the company started producing firearms and ammunition. Today the company  is the largest ammunition and arms manufacturer in SouthEast Asia. Rock Arms are famous for their 1911-design pistols. They are targeted for the end price point of the 1911 pistol market, the pistols are basic entry level MIL-SPEC versions. Some of the models, the RIA Tactical, Compact and Match offer high end features. The company is represented in the United States by its subsidiary Armscor International, Inc, located in Pahrump, Nevada with facilities in Stevensville, Montana.