The Story of Dan Wesson Holsters 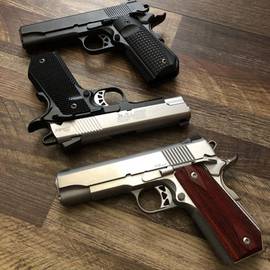 Dan Wesson Firearms, or DW is an American handgun maker preferably known for their revolvers, but known as well for the line of 1911 semi-autos. The company was founded by the great-grandson of the founders of Smith & Wesson. The journey to become an established gunsmith went from working for S&W until the company was purchased by a the Bangor-Punta manufacturing concern up to establishing his own American made line of handguns. The company produced quality handguns until it declare bankruptcy in 1990. A small blink of hope went in the half of the nineties with a limited production of revolvers but Dan Wesson was purchased by the CZ Group’s American branch in 2005.

The first guns produced by Dan Wesson Firearms were revolvers, the well known models 14 and 15. To add diversity to the line, the company started to produce a series of high quality M1911-A1 types of pistols in various calibers. The Dan Wesson 1911’s offer great quality and are fit to serve as EDC carry weapons as well as concealed carry pieces, given the various barrel lengths.